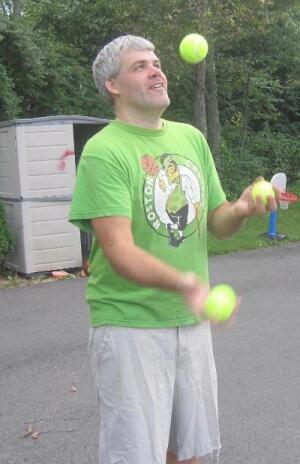 Robert Walker Tobey passed away at home in Cohasset, Massachusetts of natural causes on July 29, 2022 at the age of 49. He was a beloved brother, friend, musician, and adventurer. The dearest amongst him associated Rob with many adjectives, however, all who crossed his path agree his joy was the most memorable.

Rob was born in Boston, Massachusetts on November 10, 1972 to Philip Houser Tobey, an educator, and Solace Walker Tobey, a journalist. Rob is survived by a sister, Elizabeth M. Tobey of Greenbelt, MD, a paternal aunt, Julia C. Tobey of New York, NY; a maternal uncle, Dr. Peter Walker of Melvin Village, NH; and six Walker first cousins, including Katharine Brown of Scituate, MA. He was predeceased by his mother in 2018 and his father in 2020.

Rob grew up in Hingham, Massachusetts. He began playing the flute in elementary school and continued to play seriously throughout his school years. He graduated from Hingham High School in 1991 and went on to study music at the School of Music of Ithaca College in Ithaca, NY. He studied with Georgetta Maiolo and later joined the studio of Wendy Mehne. He performed his Senior Recital in spring of 1995 and graduated with a Bachelor’s of Arts in Music later that spring. At Ithaca he was the overnight DJ for WICB, the college radio station. After college Rob continued to perform at churches and other venues around Boston.

Rob’s love of music encompassed his entire being. It was not just something he liked, but something which he embodied. His love of pure sounds, close harmonies, and poetry was profound. He was a gifted musician who loved sharing music with those closest to him. He started his own web design business and designed and maintained websites for academic institutions, businesses, choral groups, and non-profit organizations. He was especially proud of his work for WUMB Boston (91.9 FM) as he had a particular love for folk and acoustic music.

While in junior high, Rob discovered what would become his second passion in life, road biking, and began to log the miles both through the woods in Wompatuck State Park with the early cyclo-cross riders as well as becoming a fixture within the region’s amateur racing community.

Rob was an adventurer at heart and answered the siren song of the road. Before he could drive, he explored his home town by foot and bicycle. With a driver’s license in his pocket, he memorized every road on the South Shore of Boston. While in his twenties, Rob explored the United States (including Alaska) crossing the continent more than 5 times by car and truck, and once by motorcycle.

To his family and friends, Rob will be remembered for his deep loyalty, kindness, and sense of humor. His quiet voice created a gentleness around him that he often punctuated with an infectious laugh, making his storytelling an artform of its own.

A celebration of Rob’s life will be held on the South Shore at a date and venue to be determined. In lieu of flowers, the family requests that donations be made to the following organizations: WUMB-FM Boston (https://wumb.org) and Wellspring Multi-Service Centers (https://wellspringmultiservice.org/).

A brief service will be held at Ames Chapel on Saturday, August 27 at 11 am at Hingham Cemetery, 12 South St., in Hingham, MA. It will be followed by interment of ashes in the family plot at 12 noon. All are welcome to attend. More information can be found on the website of Downing Cottage Funeral Chapel.

"A memorial party/celebration of life for Rob is being planned for Sunday, April 30, 2023. It will be held at Bancroft Hall/Cohasset Lightkeepers' Cottage, 15 Lighthouse Ln.; Cohasset, MA 02025. Please check back in 2023 at this page for updates on the event and times for the party."

To send flowers to the family or plant a tree in memory of Robert Walker Tobey, please visit our floral store.

A Memorial Tree was planted for Robert

You can still show your support by sending flowers directly to the family, or by planting a memorial tree in the memory of Robert Walker Tobey
© 2022 Downing Cottage Funeral Chapel. All Rights Reserved. Funeral Home website by CFS & TA | Terms of Use | Privacy Policy | Accessibility