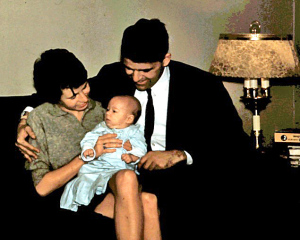 Nancy Clay Larrabee, an authentic, kind-hearted and open-minded woman, died of cancer on December 20, 2020 at the age of 86. She was a great listener. Nancy often put other people before herself.

Nancy Anne Clay was born on Halloween in 1934 and spent her early years in the Pittsburgh, Pennsylvania area. Her parents were Frances Margaret (Campbell) Clay and Clarence Benjamin Clay. Her brothers are Tom and Bob Clay. During World War II, while her father was in the military, Nancy, her mother and brothers lived with her aunts and cousins in Sewickley, Pennsylvania.  She spoke fondly of her time in Sewickley.

Nancy and her family moved to Boston after the war where she graduated from West Roxbury High School.

Nancy went on to attend Skidmore College where she majored in English Literature. She was an avid reader of books throughout her life. Nancy and Cathe Larrabee became friends at Skidmore.

After College, Nancy was introduced to Cathe’s brother, Jack Larrabee. Jack and Nancy were married around 1957.

They soon moved to Cape Elizabeth, Maine, where their son, Whit, was born. Nancy thought Maine was too cold, foggy and damp.

In 1963, the family moved from Maine to Bedford, New Hampshire. There Nancy volunteered in the Public Library. New Hampshire was colder than Maine. Nancy took up skiing. Nancy wanted a girl. Their daughter, Wendy, was born in New Hampshire in 1966. Nancy liked to swim. The family had wonderful summer vacations on Newfound Lake in New Hampshire. For three years, they were joined by the family of Nancy’s brother, Tom Clay, his wife Judy and their young children. Those were good times.

After 14 years in Bedford, they moved to Fayetteville, N.Y. in 1977. Upstate New York was colder, snowier, cloudier and rainier than both Cape Elizabeth and Bedford. No one liked the weather there.

Fortunately, Nancy, Jack and Wendy moved from Fayetteville to Hingham in 1982 where it was occasionally warm and dry. There Nancy worked as a real estate agent and volunteered at the Hingham Public Library. She also volunteered as an advocate in the Hingham District Court providing support, advice and assistance to survivors of domestic violence. She volunteered as an advocate into her 80s. Nancy felt blessed to live in Hingham near her beloved daughter Wendy, her son-in-law Mike, and her grandchildren, Samantha and Julia. Her other grandchildren, Zak and Emma, have wonderful memories of their visits with Nancy and Jack in Hingham. Sadly, Jack died suddenly, of a stroke, in 1999. Nancy loved being near the ocean where she could walk on the beach. Many of her happiest years were in Hingham.

Nancy was fortunate to have traveled in the U.S., Europe, Mexico and the Soviet Union. Nancy and Jack enjoyed visiting with their friends, including Anne Berolzheimer, Phil Berolzheimer and Robin Arena, on Little St. Simon’s Island in Georgia, in Europe and in Mexico. She sometimes wintered in Florida. She loved warm places.

To send flowers to the family or plant a tree in memory of Nancy Larrabee, please visit our floral store.

You can still show your support by sending flowers directly to the family, or by planting a memorial tree in the memory of Nancy Larrabee