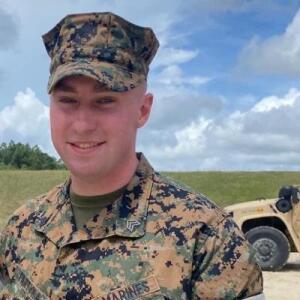 Born in Springfield, MA, Matthew moved to Hingham in 2000, attending South Elementary, the Middle School, and graduating from Hingham High School in 2015.  Matthew enjoyed playing baseball and later being a Little League umpire.  In high school Matthew was a member of the wrestling team.

Matthew enlisted in the Marine Corps and went to recruit training at the Marine Corps Recruit Depot at Parris Island, South Carolina on August 1, 2016.  In 2017 he deployed to Kuwait in support of Operation Inherent Resolve. The majority of his career was with the 2nd Marine Division, 1st Battalion, 6th Marines onboard Camp Lejeune as an Infantryman.

Matthew is survived by his parents, Gregory and Maureen Partyka, sisters Kathleen Watts and Caroline Partyka, brother-in-law Christopher Watts, and nephews John and Patrick Watts.  He also leaves Grandmother Helen McGuire and many loving aunts, uncles, cousins, and friends including his Marine Corps brothers and sisters around the country.

Visitation will be held on Tuesday, July 19th from 4pm to 8pm at Resurrection Parish, 1057 Main Street, Hingham, MA.  Mass of Christian Burial will be held at Resurrection Parish on Wednesday, July 20th at 10am followed by interment at St. Paul Cemetery, 114 Hersey Street, Hingham. Sgt. Partyka's family encourages masks to be worn by all at the visitation and funeral Mass.

The family strongly request that, in lieu of flowers, donations in honor of Sgt. Matthew P. Partyka be made to any of the following charities:

Matthew P. Partyka was born on 16 October 1996 in Springfield, Massachusetts . He graduated May 2015 from Hingham High School in Hingham, Massachusetts. Son of Gregory and Maureen Partyka and brother to Kathleen Watts and twin sister Caroline Partyka. Matthew enlisted in the Marine Corps on 20 November 2014 and went to recruit training at Marine Corps Recruit Depot, Parris Island, South Carolina on 1 August 2016.  After completion of boot camp Private Partyka reported to the School of Infantry on Camp Lejeune, North Carolina on 9 November 2016. With the completion of his training on Camp Lejeune, he reported to Marine Corps Detachment USA Quartermaster School in Fort Lee, Virginia on 17 December 2016 where he was promoted to Private First Class in February 2017. While waiting the start of school Private First Class Partyka received orders and returned to the School of Infantry on Camp Lejeune, North Carolina on 22 March 2017. Following the graduation at the School of Infantry, he received orders to 2ND Marine Division, 1ST Battalion, 6TH Marines on 5 May 2017.

In September 2017 Private First Class Partyka deployed to Kuwait in support of Operation Inherent Resolve where he was promoted to the rank of Lance Corporal in October 2017. After his return to Camp Lejeune, Lance Corporal Partyka was later promoted to the rank of Corporal in August 2019. In February 2020, Corporal Partyka was deployed to Okinawa, Japan as part of the Unit Deployment Program (UDP) and returned in August 2020. Corporal Partyka was later promoted to the rank of Sergeant in July of 2021. Directly after his promotion, Sergeant Partyka received orders to report to the Marine Corps Basic Recruiters School on 5 July 2021. Sergeant Partyka graduated Basic Recruiters School on 25 August 2021. Upon the completion of school, Sergeant Partyka returned 2nd Marine Division, 1st Battalion, 6th Marines and received orders to the 4th District, Marine Corps Recruiting Command.

Kindly have all floral arrangements delivered to the Church of the Resurrection, Hingham MA

To send flowers to the family or plant a tree in memory of Matthew P. Partyka, please visit our floral store.

A Memorial Tree was planted for Matthew